Courtesy of the Rose Hill Reporter 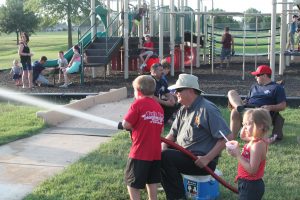 Over 350 Rose Hill residents showed up for a night of free fun, food and entertainment at the Second Annual Community National Night Out Against Crime Celebration hosted by Rose Hill Police Department and organized by Detective Sergeant Missy Tharp. Tuesday, Aug. 2

Citizens locked their doors, turned on their outside lights and spent the evening outside with neighbors and police along with all of the Rose Hill first responders.

“It was a pleasure for members of the Rose Hill Police Department to serve the  community during the National Night Out event. Thanks to our contributors it was a huge success,” stated Sgt. Tharp. “We are already looking forward to next year being an even bigger and better event.”

Butler County Fire District #3 Fire Chief Jim Woydziak, Deputy Chief Melvin Linot, Captain Kevin Webster, Fire Lieutenant Judd Gifford and firefighters Parker Fitzgerald, Chase Ozbun, Joey Donaldson, Kenneth Linot, Jeff Linot, Dan Harshbarger, Mackenzie Webster and Zack Zarling assisted in the set-up and tear down. Fire Engine 31 provided entertainment as well as education about the function and use of the equipment as wanna be firefighters scrambled aboard. Some of the youngsters donned firefighter bunker gear and helmets as they hosed down the “fire house” and ran through the jet streams of water. 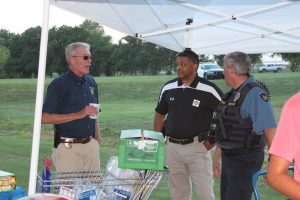 The Butler County EMS crew of Alicia Pyle and Joshua Pulliam were also on hand to give people a tour through an ambulance and acquaint kids with the emergency response equipment.

The Butler County Emergency Services Chaplains donated a bouncy house manned by Pastor Ron Long and Pastor Robert Varner which was a huge hit with the younger set. McGruff the Crime Dog sauntered around posing for pictures and made it a fun night for the kids.

A K-9 Unit demonstration drew a crowd of over 60 residents to watch Officer Smith and his K-9 partner Urlo run through an actual drug search and seize simulation. Officer  Smith explained how the team worked together and what kind of training was required for both of the to be certified.

Officer Shaner and Officer Briggs spoke to guests about safety issues and offered pamphlets on various services along with tickets for the prize drawing. 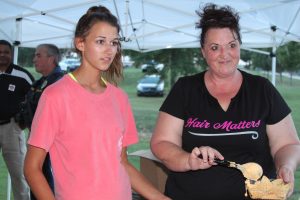 Police officers truly “served” the community with over 240 slices of pizza donated by the Rose Hill Pizza Hut and Casey’s General Store. Sandwiches and cookies came from Subway. Over 500 hot dogs and fixin’s were grilled up by Sheldon and Kathy Xenos of Chris Cake of Wichita who also provided sno-cones along with nachos and cheese.

Friends and neighbors danced and sang all night to the music of Steve  Huckaby of Rose Hill who also announced the prize winners as Sgt. Tharp handed out the gifts.

“Every child received a prize that night,” said Sgt. Tharp. A real going away party was given to crime and drugs across the country in the national event.