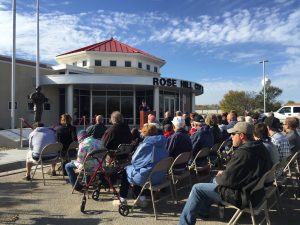 Courtesy of the Rose Hill Reporter

A lone soldier stood guard over the memorial of honored veterans that was dedicated to the City of Rose Hill Heroes Veteran’s Day, Friday, Nov. 11, 2016.

The eye of the beholder will see many different things when looking at the monument, the statue of the universal soldier, depending on their diversity of experience and emotion. The relief of an American flag graces the foot of the pedestal with a plaque saluting and expressing thanks for the service men and women who have fought for our country and their families. The statue will be universal, a “forever memorial” to all the soldiers, male or female. surrounded by paver bricks bearing the names of veterans.

Mayor Beth Pompa welcomed the almost 200 people to the ceremony and Pastor Ron Long of the Rose Hill First Baptist Church gave the invocation. Pompa asked that all of the veterans present stand and be recognized. “We cannot thank you enough for what your service means to our country and our community,” said Pompa. “We are proud to honor you and those who have gone before you with this impressive memorial” Kathy Vines, Kelly Mendoza and Christina Zenner pinned corsages on the veterans and gave the servicewomen roses.

Pompa recognized the memorial sculptor John Parsons, members of the city council, the Planning Commission and the city staff who all made this possible and was fully funded by private donation.

Major James Bilby of Rose Hill was introduced by Pompa as the guest speaker. Major Bilby is the Commander of the 184th Operations Support Squadron, 184th Intelligence Surveillance Reconnaissance Group, Kansas Air National Guard, McConnell Air Force Base. He has been deployed on nearly a dozen combat operations and has served as a Flight Commander, Wing Executive Officer and Director of Operations. Major Bilby and his wife, Jennifer, have three sons, Adam, James, and Josiah.

“If what President John F. Kennedy said is true: “A nation reveals itself not only by the men it produces but also by the men it honors, the men it remembers.” Today we are honoring generations of our Veterans today in Rose Hill with over 98 pavers on this memorial to recognize their service,” stated Bilby.

“This memorial before us recognizes the service all the way back to the Civil War. Some were drafted and some volunteered but all took an oath to defend this great country against all enemies that have ever tried to threaten our way of life…

Most towns have military equipment to represent their Veteran memorials. Some have a tank and some have even airplanes. But this statue before us represents the fighting spirit of the American patriot.

We are the fortunate ones and truly blessed to have the community we have. This is the reason I moved and choose to live in Rose Hill…

“We are blessed to live in a community like Rose Hill that has a large and proud Veteran population.  Future generations from our community will continue to answer our nations’ call and proudly serve in uniform as those before them did.  They will continue to carry the torch of liberty, defend this great nation, and shape our future. And when their service is done they will be business owners, farmers, volunteers to the community, or just be an old wrestling coach like myself,” Bilby stated in conclusion.

A flag raising ceremony followed by the McConnell Air Force Honor Guard after which they played “Taps.”

A total of 98 Veterans are celebrated with this memorial on individual granite stone pavers donated by their families. The pavers are displayed in alphabetical order by last name. The pavers include Veterans of the Civil War, World War I, World War II, Korea, Vietnam, Iraq, and Afghanistan.